↑
Home∕Home∕Is it worth giving up gluten?

Is it worth giving up gluten?

Non-coeliac gluten sensitivity is now a recognised syndrome but many doctors are still sceptical and a diagnosis is controversial. Sarah explains the issues about a gluten-free diet – and why her jeans are now baggy! 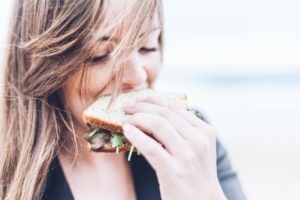 Almost any conventional nutritional guidelines will lay down the law that whole grains should be a staple of a healthy diet. But for a significant number of people, grains are a problem. The villain is a family of proteins called gluten, found in wheat (the most commonly consumed), spelt, rye and barley. Oats may affect some people.

The two main proteins in gluten are glutenin and gliadin, which is responsible for most of the negative health effects in wheat. Interesting side note here: the name glu-ten comes from the fact that when flour is mixed with water, those proteins form a sticky network with a glue-like consistency, which makes the dough elastic so it rises. The word glu-ten is derived from this glue-like property.

Lets be clear, most people are fine eating gluten but in a significant minority, gluten can cause ill health. There are three main conditions linked to it: coeliac disease, wheat allergy and non-coeliac gluten sensitivity.

The most severe reaction to gluten is coeliac disease, an autoimmune disorder affecting about 1% of people where the body perceives gluten as an invader and attacks it, as well as the gut lining. This damages the gut wall and can cause serious digestive disorders as well as a host of other debilitating problems. There is a test for coeliac disease but many people don’t consult their doctors so miss out on testing, which can lead to potentially life threatening concerns. For more information, visit coeliac.org.uk, the website of the independent charity Coeliac UK.

Allergic responses to inhaling wheat flour have been recorded since the Roman Empire, triggering respiratory symptoms in the shape of so-called baker’s asthma and rhinitis (stuffy runny nose, sneezing and/or post nasal drip). According to one review, wheat allergy can be occupational as above, or a food allergy affecting the skin, gastrointestinal tract (diarrhoea and bloating) or respiratory, or even linked to a combination of wheat and exercise. There are various tests for wheat allergy, although none are wholly satisfactory.

The third condition linked to gluten is non-coeliac gluten sensitivity, usually abbreviated to NCGS. This is the one that particularly interests me as I suffer from it, as do several people I know including a doctor friend (more below). A UK population-based survey revealed that 13% of people believed they were gluten sensitive but fewer than 1% had a medical diagnosis supporting that.

Until recently NCGS was pretty well ignored by the medical profession and dismissed as ‘being faddy’ and a diagnosis remains controversial. This is largely because, as nutritionist Dr Marilyn Glenville confirms, ‘there’s no definitive test for NCGS. A diagnosis relies on excluding other gluten related disorders and considering the patient’s symptoms.’ Dr Glenville (marilynglenville.com) does use a laboratory blood test, which shows up antibodies; ‘however, these are only positive in about half of people with NCGS so the test has to be used in conjunction with a clinical presentation,’ she says.

A comprehensive review published in the World Journal of Gastroenterology in 2015 lists these symptoms:

The clinical presentation of NCGS includes gastrointestinal symptoms, such as abdominal pain, bloating and altered bowel habit, and systemic symptoms, such as fatigue, headache, bone or joint pain, mood disorders and skin manifestations (e.g. eczema or rash). Symptoms usually closely follow the consumption of gluten and disappear after gluten withdrawal.

There is an overlap of symptoms with irritable bowel syndrome (IBS) and people who report with NCGS and diarrhoea-related IBS have been seen to benefit from a gluten free diet. In one well-regarded study, gluten sensitivity affected 28% of IBS sufferers.

However, the authors note that ‘the concept of NCGS as a syndrome has been questioned’. Which is pretty irritating to people who have suffered these symptoms and found they are alleviated by avoiding gluten. I first had problems with gluten nearly 30 years ago after I’d had an intense period of stress helping to nurse a dying friend. I was vegetarian at the time and my diet was heavily wheat oriented. My main symptoms were a brain so foggy I could hardly write a coherent sentence, intense fatigue and low mood plus a litany of digestive symptoms, weight gain, swollen fingers and aching joints. Doctors were puzzled but an alternative therapist recommended I avoid wheat and within 48 hours I was a different bunny.

Until recently, I ate very few grains partly down to that experience and also researching The Adam & Eve Diet, which I wrote with naturopath Roderick Lane (out of print but available second hand) about diets for different biological types. But some grains had crept back in – not a lot but, golly, was I suffering: mainly from unprintable and very uncomfortable digestive symptoms plus a litany of aches and pains, and lack of energy. Then a new London clinic, BelleCell, which focuses on genetic analysis, offered me a comprehensive nutrition analysis. Gluten was revealed as ‘especially unhealthy’ for me. It was the kick I needed to avoid gluten entirely. And the difference is clear. The majority of symptoms cleared rapidly, and I feel so much clearer and brighter.

GP and Health Educator Dr Andrew Tresidder says that, although not coeliac, he has also benefited greatly from excluding gluten. Three years ago, the discussions raised by two books – Grain Brain by Dr David Perlmutter and Wheat Belly by Dr William Davis – persuaded Dr Tresidder to try a wheat and gluten free diet. Within 24 hours, his head was clearer and symptoms of electrosensitivity had gone. Within two days, his habitual heartburn had gone. After three days, his bowels, which had been disturbed since travelling 30 years before, had calmed. After a week, odd joint aches were better and a week on from that – 14 days in – came the big surprise: ‘I suddenly realised I no longer craved eating every two hours – I had come off my carb addiction!

So, is it worth excluding gluten? If you have symptoms of non coeliac gluten sensitivity, it certainly is, in my experience and Dr Tresidder’s. Although dietitians typically cite the potential for nutritional deficiencies, there’s a wide range of non-gluten grains such as corn, millet, sorghum and rice, plus the so-called ‘pseudo-cereals’ amaranth, buckwheat and quinoa. Today, there are lots of appetising products, such as pasta, made with these alternatives. I even make my own gluten free, low sugar, paleo bread now with almond flour, eggs, olive oil, seeds and nuts. And there’s a bonus: my tummy is so much flatter that my jeans are positively baggy – result!

Lastly, here’s an interesting post script from Dr Glenville: ‘Research shows that non-coeliac gluten sensitivity can upset the balance of bacteria in the gut, cause inflammation in the brain, increase cognitive dysfunction and increase a person’s vulnerability to Alzheimer’s.’ Given that dementia will affect one in six people over the age of 80, this is another factor worth considering. For more information, read Natural Solutions for Dementia and Alzheimer’s by Dr Marilyn Glenville.